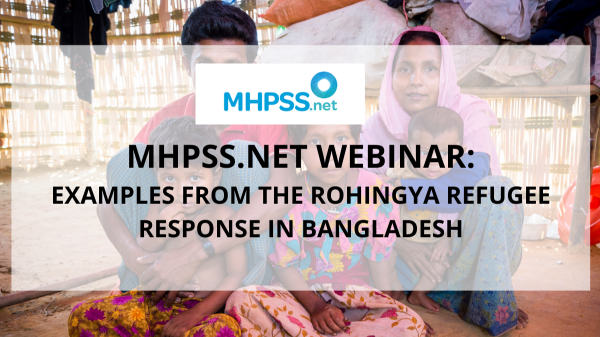 [WEBINAR] “Community engagement in MHPSS: examples from the Rohingya refugee response in Bangladesh”

Join us for this webinar highlighting current examples of community engagement with Rohingya refugees in Bangladesh. We are pleased to be introducing four presenters working in mental health and psychosocial support with substantial experience of involvement in the Rohingya response in Bangladesh.

Introducing the webinar, Mohamed Elshazly, MHPSS officer with the United Nations High Commission for Refugees (UNHCR) in Cox’s Bazar, gives a brief overview of Intervention’s special issue on the Rohingya response which has provided the impetus for this webinar. Mohamed will unpack some of the challenges and opportunities encountered in the response in Bangladesh.

The work featured in this webinar was documented in the recent special issue of Intervention, published in November 2019. The journal featured 28 articles from a diverse range of contributors, providing a unique perspective into the challenges of working with such a multiply disadvantaged population.

Intervention, an open access journal, is hosted by Arq International.

NM Mahmudul Alam is a psychologist from Bangladesh with more than 12 years’ experience in clinical mental health, capacity building activities, partner monitoring, humanitarian mental health and psychosocial support programmes. Currently he is working with UNHCR as a Psychosocial Associate. In this role, he is focusing on strengthening the referral and coordination among MHPSS actors and others at field level and enhancing the capacity and supervision of psychologists and community psychosocial volunteers. He completed his Master’s degree in counselling and clinical psychology at National Dong Hwa University, Hualien, Taiwan. Previously he worked with UNHCR under UNOPS contract as a Senior Mental Psychosocial Support Assistant, and with Action Against Hunger as programme focal with the mental health and care practices programme. 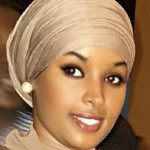 Shair Dhahabu Ibrahim is a humanitarian professional with over ten years’ experience in the field of protection and gender based violence in hardship and emergency zones.  She has been involved directly in emergency and conflict-affected populations programmes in Africa and Asia, where she has gained a lot of experience in coping with hardship situations. She has worked with several international organisations. Shair has worked in Kenya in refugee programmes; in Somalia in national emergency programmes and most recently with DCA leading the organisation’s GBV and protection programmes in the Rohingya response in Cox’s Bazar, Bangladesh. 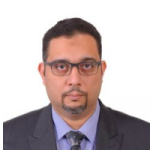 Mohamed Elshazly is a consultant psychiatrist from Egypt with more than 15 years of experience in clinical mental health services, capacity building, and humanitarian mental health programmes in Egypt, Turkey, Iraq, and Bangladesh. Since February 2018, he has been working in Cox’s Bazar as the MHPSS officer with UNHCR. In this role, Mohamed is responsible with his team for mainstreaming mental health interventions within the humanitarian response, particularly in health and protection, strengthening of community based mental health initiatives, and scaling up brief psychological interventions. Prior to his deployment to Bangladesh, Mohamed worked with UNHCR in the Kurdistan Region of Iraq for two years (2016-2018), and with International Medical Corps in the Middle East (2013-2016) and with PSTIC and MSF in Egypt (2012-2013). 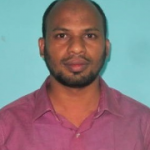 Md. Salek Ahmed is a psychologist from Bangladesh with more than eight years’ experience in community based mental health and psychosocial services, capacity building, and humanitarian MHPSS programmes in different areas of Bangladesh. Since September 2018, he has been working in Cox’s Bazar, Bangladesh, as the MHPSS field operational officer with IOM UN Migration. He is responsible for implementing community-based MHPSS programmes integrated with other programmes, especially health and protection and mainstreaming mental health interventions within the humanitarian response and scaling up the presence of psychological interventions in government facilities. Before working with IOM, he worked with Oxfam in the Teknaf Region of Cox’s Bazar  in 2018, and with Action Against Hunger (ACF) in Cox’s Bazar, Barguna, Sirajganj and Satkhira (2009-2018). 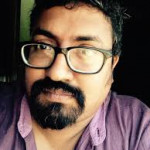 Ananda Galappatti is a medical anthropologist and a practitioner in the field of mental health and psychosocial support (MHPSS) in situations of humanitarian crisis and adversity. His work over the past 20 years has been concerned with improving access to knowledge and skills, building collaborative networks and enhancing coherence within the field in Sri Lanka and also globally. Ananda was a co-founder of the journal Intervention and continues to serve on its editorial board. He is a co-founder and co-Director of the MHPSS.net online platform. Ananda is also a visiting lecturer at the Faculty of Graduate Studies, University of Colombo. In 2010, Ananda co-founded The Good Practice Group, a social business for the development of MHPSS services, and he serves as its honorary Director for strategy. He is currently a Technical Advisor on Psychosocial Support to GIZ Sri Lanka. In 2008, Ananda received a Ramon Magsaysay Award for his work in the field of MHPSS intervention in emergencies. He was elected to the Ashoka Fellowship in 2011.